** Note: This post is part of a 12-step series in my master bedroom makeover. Links to the other (previous) steps are listed at the end of this post.

This is just a simple post to show you how to save $millions$ (yep) by making your own faux capiz shell chandelier. Here's mine: 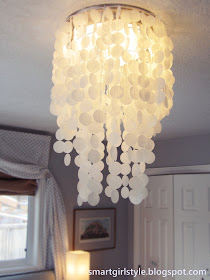 Our original master bedroom lighting was this: 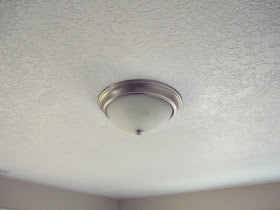 So. Several online tutorials involved melting wax paper together with your iron to create the "shells." This method, however, caused me to nearly burn my house down, because my iron didn't melt the wax paper together and so I tried to melt it in the oven but actually it ignited and large flames engulfed the inside of my oven and around my arm when I opened it up to get the pan of wax paper out. True story. Also traumatic.)
I came up with this non-flammable method instead:
First: Find some sort of hanging device, like wire planters/hanging basket holders or wire bowl. Spray paint this white so it's ready when you are.
Get some rice paper. I found mine at Hobby Lobby with the calligraphy stuff; it was about $14 without the 40% off coupon. 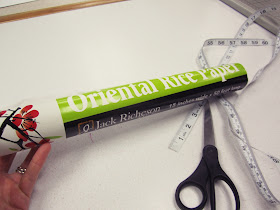 I called around to find the best deal on laminating and then laminated a bunch of the rice paper. I think I used six 15"x24" sheets for a four-tier 12" chandelier. (Money-saving tip: ask the laminating people the width of their laminating machine, and cut the rice paper roll into sheets that wide so they can send the paper through sideways and maximize your money.) Looked like this: 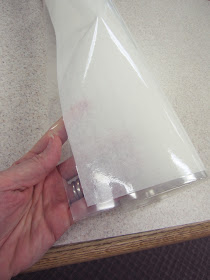 Cut out and staple two of the sheets together in several places along the edge to hold them together while you circle punch. 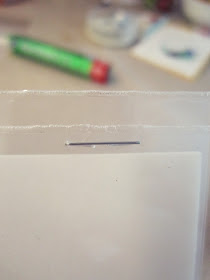 Using a circle hole punch (I used 1.5"), go to town. Watch or listen to something interesting, because this can be tedious. Oh, and it can be rough on circle punches, I won't lie. I went through two of them. 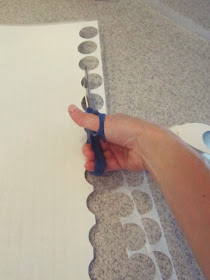 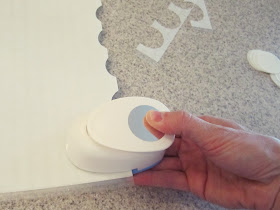 A zillion hours and the start of carpal tunnel later, you'll have a bunch of circles. Lay them out to see how many you want per strand. I think I did 10 on the bottom tier, 8 on the next, and 7 in both of the top two tiers. 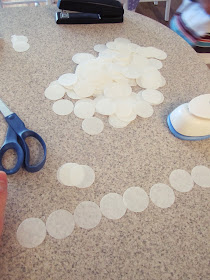 I laid some wax paper down onto a baking sheet and started hot gluing circles together, just a little bit on the ends. (The wax paper is for if some glue leaks out from your line, it won't stick.) 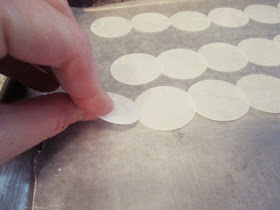 Then I glued a little fishing line onto the top circle and left about 6" of overhang. This will be for tying the circle strand onto the wire fixture. 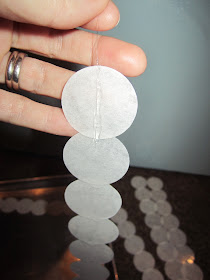 I started feeling a little antsy after creating a bunch of circle strands, so I started tying them onto the wire fixture and then hot gluing the knots. (Just because I'm not the best fishing line square knotter in the land and wanted these to stay put.) 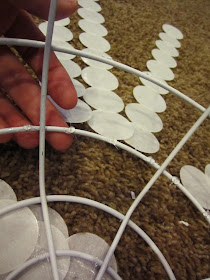 After what seems like (and actually is) a long time, you'll end up with loads of circle strands tied & hot glued to the wire fixture. Be careful not to bend the strands so the glue won't snap apart. 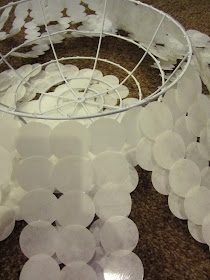 Hopefully you will have measured your wire hanging device prior to starting to make sure it fit the light fixture space. I didn't. Mine was 12", and I needed something at least 14".
*blink*
Ah, nuts. 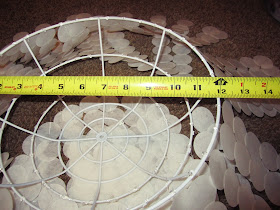 I was super bummed at first, but then I realized this chandy would fit perfectly in my daughters' room. They LOVE pretty stuff like this. I hung it up with some inexpensive white metal hooks from Lowe's, and viola! 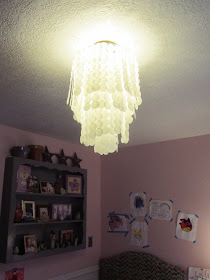 You'd think (hope?) that this was the end of the story, but it's not. Remember that the master bedroom is still without an acceptable light fixture. And I really really wanted a breezy chandelier in there (even though now we'd be twinners with our 4- and 6-year-old daughters...is that weird?).
I decided to make another one, but I didn't have any more wire hanger devices handy...neither could I find one for $10 or less. Until I went into my garage and spied some old round tomato support things! Hanging from the garage wall! Hanging there for years because, frankly, they didn't do squat in supporting our tomatoes! Hooray for their failure!
An embarrassing display of a happy dance and some wire snipping later, I had fashioned the *perfect* wire hanging thing. And I double-checked the size this time. 14" exactly. BAM. 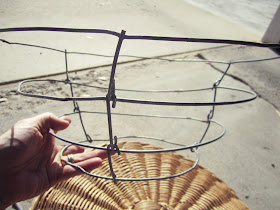 I started zealously punching many more circles. This time, I sewed the circle strands instead of gluing them (used plain white thread) and did everything else the same, and I must say...this method was waaaaay better than hot gluing the strands. Easier, faster, and I like the look of the chandelier better. A little more free & easy; the "shells" move a bit when you walk by, and I like that. 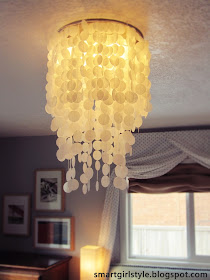 It does require more circles if you sew them, that's for sure. Because they turn sideways sometimes (unlike the glued ones). In fact, I may still beef up the number of strands on this one. But for now, I rest. And enjoy the light.


Tomorrow is Day 10: Furniture. Come back for the vanity chair's new look!

{shared A Little Knick Knack, A Round Tuit, A Vision to Remember, Be Colorful, Be Different Act Normal, Chic on a Shoestring Budget, C.R.A.F.T., DIY Showoff, Finding Fabulous, House of Hepworths, Marvelously Messy, My Romantic Home, Not Just a Housewife, Sew Can Do, Shabby Nest, Simply Designing, Six Sisters' Stuff, Somewhat Simple, The 36th Avenue, The Girl Creative, Under the Table and Dreaming, WhipperBerry}
Share